So far in our blogs, we have talked a bit about performance, but today we’re going to show you a way you can confirm without doubt that you’re writing high-performance T-SQL code. This extremely valuable technique is something Developers and Testers alike should be familiar with.

Why one million (1M) rows? Well, the answer to that question is really three-fold.

Along the way we’re going to learn about a variety of ways that test data can be generated. Unfortunately we won’t be able to cover every possible case. We’ll need to leave some of them to your imagination. Once you understand the basics, you should be able to extend the concept to other types of test data relatively quickly.

Suppose you have a table that contains an INTEGER ID number column. Your application requires that when that number is shown on a form, it displays with leading zeroes. There are many ways to do this but we’ll look at three.

To answer that question we’ll construct a 1M row test harness based on the Numbers table we created in our blog on Tally Tables. We’ll also show an example of one of those methods using an in-line Tally table (from the same blog), so you can see the difference between using a permanent vs. an in-line tally table.

You should always run the test harness a few times and record the results of each run. By looking at the results, we see that methods 1 and 2 are pretty close, but over the 4-5 runs that I did, method 2 was consistently just a little faster in elapsed time. Using an in-line Tally table in this case was just a little faster than using the permanent Tally table (that may not always be the case).

You may be saying to yourself that this little 9% improvement doesn’t mean much, but picture it in the context of a much more complex query, where every slight improvement you can make counts for something.

Let’s now look at some key aspects of the test harness we used:

CPU time can be important sometimes, so you may also want to look at that. It turns out that method 2 also appears better than method 1 in terms of CPU time, but that may not always be the case and over the 4-5 runs we did it often was a tie.

After this test, we can say pretty clearly that method 2 was the highest performance method among the ones we looked at. We are also now well on our way to being able to say definitively that we’ve written the best possible query to solve our business problem.

In this case study, we will illustrate a few additional concepts you should know when constructing a test harness:

The business problem is that we wish to remove numbers from character strings that contain only letters and numbers. For this task, we have written two T-SQL FUNCTIONs that basically do the job but need to be called differently.

Both FUNCTIONs have the same call signature, which includes the pattern of characters you want removed, and both return the same results (only the alphabetic characters).

Before we proceed to generate a test harness containing lots of random strings we can test, it is necessary to familiarize you with a way to generate random numbers in T-SQL. So let’s consider the following statement:

If you run this statement multiple times, you’ll get different results each time. In each case, you get a number between 1 and 100. The RNwDec column will have 2 decimal digits. This is the standard method in SQL to generate a Uniform Random Number (URN). If you need a wider range of numbers, change 100 (or 10000 for RNwDec) to something larger.

To generate a random string of characters, you can use the URN formula as follows:

You can try this one yourself. Each time you get a different string consisting of 1 to 20 letters (always the same letter repeated) and 1 to 20 numbers (always the same number repeated). The string will be of varying length between 2 and 40 characters. To get a string of maximum length 8000, all you need to do is replicate the pattern a random number of times. The final (outer) replication should be performed up to 200 times, so can be done like this:

Now that we understand the tools we’ll need, here is the test harness.

For this test, we’ll illustrate the fact that sometimes you don’t need to go up to 1M rows to distinguish the difference between two queries. In this case, it becomes quite apparent at 1000 rows. Here are the timings that are displayed by the two SELECT statements:

That’s already a pretty large difference so you can imagine how long it would take to run at 1M rows. Here’s an explanation of the differences between this test harness and the one from before:

The latter method of capturing elapsed time is used because of a quirky behavior of STATISTICS in some cases when you are timing a scalar-valued, user-defined function. SQL MVP Jeff Moden explains this in How to Make Scalar UDFs Run Faster.

This example also serves to demonstrate the well-known fact that a good set-based query will almost always be faster than a loop. If you remember our introduction to DelimitedSplit8K in our Tally Tables blog, Jeff Moden uses the same basic methodology (an in-line Tally table) to make DelimitedSplit8K extremely fast.

In this example, we’re going to perform a test on two solutions to the Running Totals (RT) problem in T-SQL. The second solution is only valid in SQL 2012. First, we’ll set up a test table and populate it with some random data.

We have populated our table with a series of date values that increases in an hourly fashion; including a “Value” that is simply a random integer between 1 and 100. We’ll be calculating the two RunningTotal columns from our Value. Note that at the end of this “batch” we have included the batch separator (GO). The test harness includes only 10,000 rows because we know in advance that this will be a sufficient number to distinguish between our solutions (1M rows is still recommended for most normal cases).

The first running totals solution we’ll look at is what is known as a triangular JOIN, because for each row it adds up all of the prior rows using a correlated sub-query. Once again, notice the batch separator (GO) at the end of the batch.

The next solution, which only works in SQL Server 2012, is a new facility Microsoft has kindly provided to us for calculating running totals (and a host of other things).

We’ve also included a final SELECT (in the last batch) to show that both running totals were calculated correctly.

To run this code and obtain our timings, we’re going to learn to use Tools/SQL Profiler. This brings up a window allowing you to name the profiler (trace) if desired. 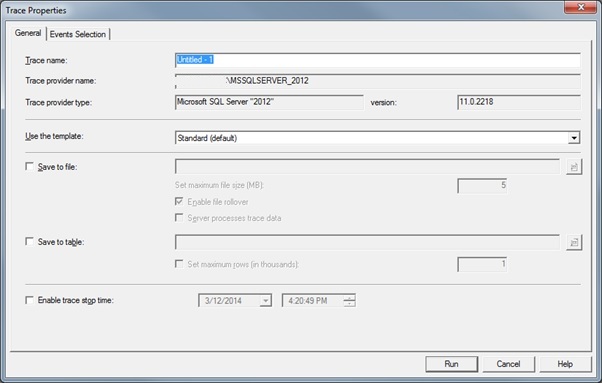 After you click Run, the Profile session will begin. 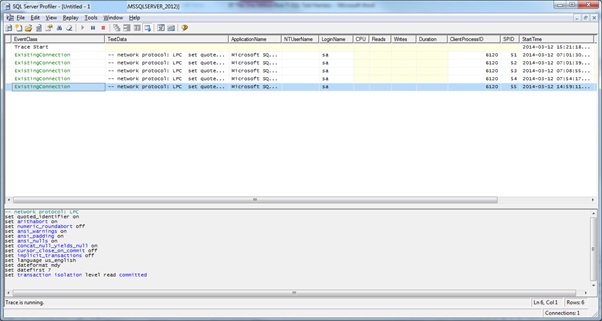 You can now execute the four batches of T-SQL we created above, two of which contain the solutions of interest. Once the run is complete, the Profile window now looks like this, where we have circled in red the two results of interest. 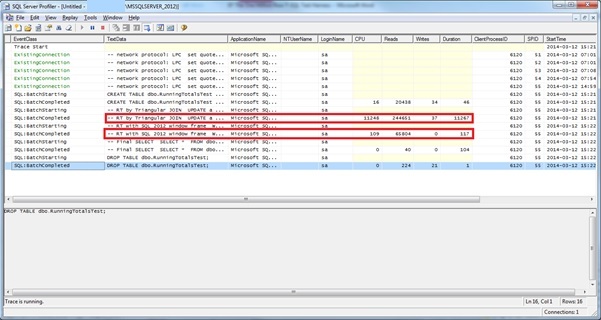 Notice how the comment we placed at the beginning of each batch, clearly shows up on the BatchCompleted lines with our desired results:

The first ten rows of results displayed show that both of our running totals solutions worked correctly, yet the timing results tell us that they are definitely not equivalent!

SQL Profiler is a very useful way to time a batch that contains multiple SQL statements (like if you want to test performance of a CURSOR vs. a set-based solution). Take care when setting up each batch to avoid unnecessary overhead in one batch vs. the other.

In a future blog, we’ll describe a method for calculating running totals that works in any version of SQL that is faster than both of these solutions.

Summary and What We Learned

Firstly and most importantly, we’ve learned how to create a one million row test harness so we can compare the performance of two queries that return identical results, and why this is an essential step to verifying query performance.

We’ve learned three methods to time the queries we’re comparing as they process the test harness:

Some hints to follow when using the 1M row test harness (not all of which are mentioned):

Now you’re ready to start learning how to write high-performance T-SQL code, because now you have a tool that is essential to proving that you’re writing queries that are the best that they can be!